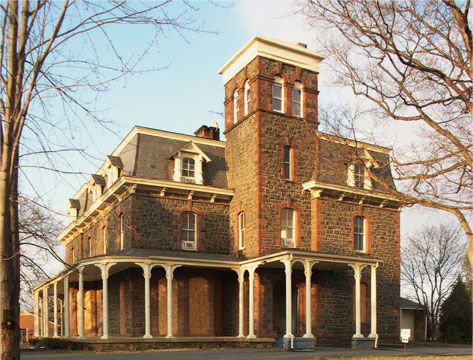 Feasibility Studies, Condition Assessment Reports, and Historic Structure Reports provide a vital analysis of not only historic buildings, but any existing structure that is being considered for upgrading.

“Carlheim” was constructed in 1872 for Pennsylvania industrialist Charles R. Paxton as the centerpiece of his 760 acre estate and farm. Designed by Henry Dudley, a New York architect and 1857 Founding Member of the American Institute of Architects, Carlheim was constructed of local stone exterior walls and slate roofs in the 'Second Empire' style that was popular in the mid- and late-19th Century. The house has 32 rooms and over 20,000 square feet with highly decorated plaster and woodwork throughout. An attic-mounted rainwater collection cistern provided a water supply to combat a fire; acetylene gas fueled lighting; an early domestic boiler (still standing in the basement) heated water; and a large ice house/dairy serviced the adjoining kitchen wing.

Along with Tidewater Preservation, Inc., a restoration contractor in Fredericksburg, VA, we recommended to the current owner—a Foundation—an adaptive reuse of the mansion for administration and office space for the Aurora School. Our report included present and proposed floor plans, Condition Assessments of the exterior and interior spaces, tire and building code analyses, and restoration/rehabilitation cost estimates.

The pump house, built in the 1880s as a small utilitarian structure, served the Spring House Hotel and its adjacent buildings until a municipal water system was provided. Since then, the Pump House had been abandoned and become a clubhouse, per se, for teenagers, suffering the ravages of time and the elements, portions of the building's roof had been ripped off by hurricane-force winds, and the wood foundation piers had decayed to a point of severe structural instability.

The Ad Hoc Spring House Pump House Committee was formed to reconstruct this noteworthy historic island landmark. It had been determined by design and construction professionals that the pre-demolished structure was in perilous condition and could not be safely stabilized, but should be reconstructed with some salvaged materials from the original structure.

We measured the building on-site, and prepared a set of drawings for the eventual reconstruction, using original moulding profiles and an historic 1880s photo as a guide. The original board roof, board and batten siding, and moulded cornice supported by outriggers will be reconstructed. The historic structure was razed for safety reasons.

It is anticipated that the pump house will be reconstructed in late 2012/early 2013; it may eventually serve as an information and educational center for Block Island’s Victorian-era hotels and lifestyles. 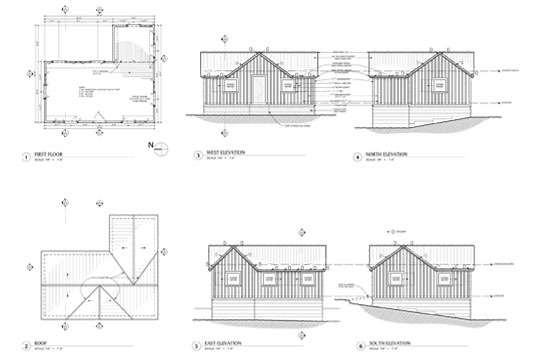 First constructed in the late 18th century and enlarged with extensions to the original wings in 1820 – 1830, Edgefield overlooked the Appomattox River. Before the house was dismantled and relocated to a site in Albemarle County, Virginia, we measured and documented it photographically. The measured drawings included all floor plans, exterior elevations, cross-sections, and details such as the Federal-style window muntins, decorative plaster and brickwork, and remnants of original Colonial hardware and doors in the upper floors. 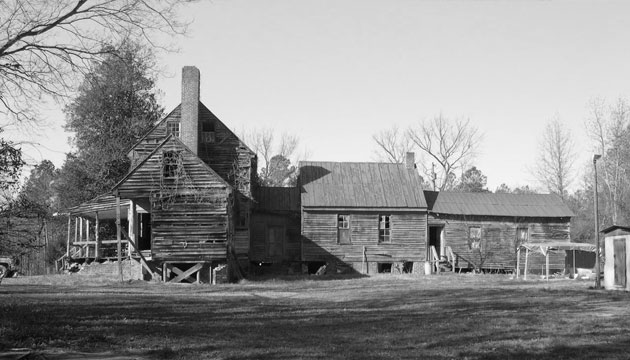 Constructed of local stone in 1908, this handsome chapel— abandoned and forgotten—was the centerpiece and “Town Hall” for the nearby whistle-stop community of Winston. In the spring of 2012, Doug Gilpin, along with a fellow architect, two architectural historians, and a high school student, provided pro bono services to measure and document the chapel. Our completed work was submitted to the Historic American Building Survey (HABS) for inclusion in their national archives. The Chapel's history and documentation process was the subject of a presentation at the Architecture Exchange East Conference in the fall of 2012.

This Report, authored and coordinated by Mr. Gilpin, included the involvement of structural engineers and specialized conservators of historic masonry, plaster, and woodwork. The Scope of Work for this 1800-1824 landmark structure included in-depth on site review, and recommendations for conservation and repair of detaching historic plaster, failing masonry in the vicinity of fireplaces and hearths, structural deficiencies, and woodwork deterioration.

Work also included the development of key floor plans, details of the conservation work, and comprehensive specifications for the subsequent repairs.