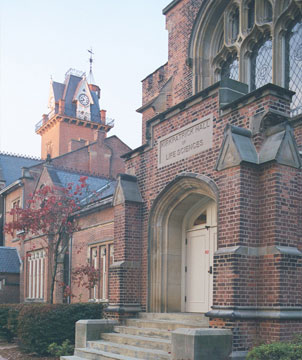 We have provided services to a range of educational structures from a day care center to a middle school for girls to a private 5-12 grade facility to the collegiate environment.

This historic high Gothic Revival structure (1911) houses the College's Biology and Psychology classrooms, labs, and offices. It is a part of the College’s “Old Main” (1858-1872), a National Historic Landmark, and the academic focus of the campus. Our work included exterior masonry restoration, handicap accessibility, upgrading of all mechanical, electrical, security, communication systems, and restoration of many of the historic interior finishes. The existing Lower Level was expanded significantly by underpinning the foundation and excavating a crawl space.

Old Main is the centerpiece of Bethany College’s campus. Old Main was built over a period of years beginning in 1858 and finally completed after the Civil War in 1872. Its original architect was James Key Wilson of Cincinnati, who was also instrumental in the design of “The Castle” of the Smithsonian Institute in Washington, D.C.

Our firm performed a structural evaluation of the roof framing components of the historic tower. During the course of the survey, the condition of the stone was noted and further examined. A stone conservator was brought to the project, and a determination was made that the 140+ year old stone, which undoubtedly had been quarried near the College, was beginning to fail. Some stone “chunks” had detached from the projecting catwalk, and excessive delamination was occurring within the tower itself. A decision was immediately made to replace the entire stone catwalk and projecting bracket assemblies. Replacement sandstone from an Ohio quarry was custom fabricated for the project, to match the original stone in color, but far exceed its original durability. This work required the temporary removal of the steeply pitched slate-covered mansard roof superstructure, which craftsmen repaired on the ground. 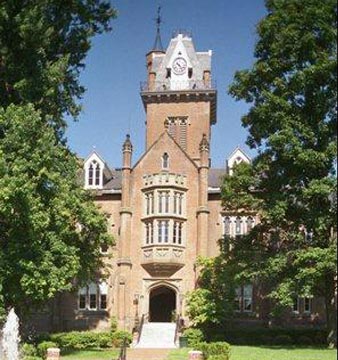